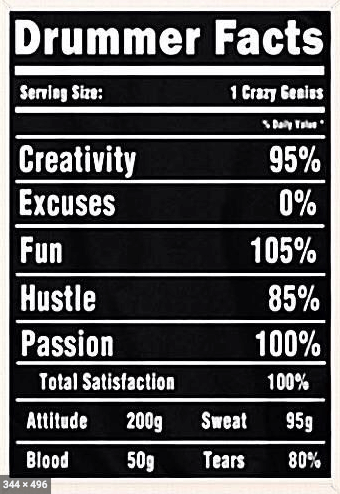 The rhythm section for most styles of music will never be complete without it. The combination of its simplicity and importance to music can be quite peculiar. But it works and there are plenty of interesting things that evolved around this musical instrument. We have gathered ten of the most interesting things we have learned about drums.

The very first drums to be discovered and known to men is called the Alligator Drum. This instrument is made from clay and alligator hides bounded together by a kind of durable string. It has been said to have originated from the Neolithic China. Historians have observed that this musical instrument manifested shamanistic characteristics from its markings and form. Because of this, they believe that these are used for sacred ritual ceremonies as early as in the 5500 BC.

The cliché saying that one is never enough is embodied in this next interesting fact. See the video to witness how an avid drum aficionado pursued his dreams of building the largest drum set in the world.

This magnificent collection of drums and other percussion instruments was developed by a full-time minister that describes himself as “an Agent of Rhythm”. Dr. Mark Temperato which is also a professional musician lovingly collected and assembled the world’s largest drum set for 35 years to fuel his passion on drums. His drum set is composed of a wide variety of drums, cymbals, and other equipment with almost over 50 different kinds of make and model. This set is stored and transported in a custom 18-wheel tractor trailer which needs three to four people and 15 hours to set up.

Other than sacred religious rituals, one of the earliest known function of beating the drums is for war. Back in the day when there was no access to modern mobile communication like radio, cellphone, or internet, the military used snares and its relatives to send coded messages to soldiers. This communication system has played a very important role in medieval and Renaissance Europe. It was said that drums were also used to send messages over long distances between villages in Africa and India.

We are not exaggerating when we say that the radius of the largest drum is longer than the height of an average human person. It is so big you would initially think from afar that it is just a colorful and artsy cylindrical room. But, it is definitely not just colorful and artsy. It also produces some awesome sounds and provides some awesome beats. The CheonGo drum, as is called in traditional Korean, was created in a small town of South Korea. It weighs a generous amount of 7 tonnes and measures 5.54 m (18 ft 2 in) in diameter.

The world’s tallest drum was unveiled a few years back at the Nigerian Drums Festival. This festival aimed to feature and empower the rich African cultural heritage through drums. It was during this event that the 18-feet high drum (which was an improvement from the last 17-feet) was unveiled by Governor Ibikunle Amosun. This drum is claimed to be the tallest in the world and it definitely further fostered the spectacle that the event organizers are going for.

The most expensive drum set sold at an auction

It is no wonder why this particular drum set was easily sold at an auction. And it is definitely a give-away why it is the most expensive one sold as of to date. This drum set previously belonged to the most famous drummer in this era—Ringo Starr. Sir Ringo Starr, as he is now referred to these days, is famous worldwide for being the drummer of the Beatles and it is apparent that his drum set became famous like him as well.

Drums were not spared with the effects of modern technology at the dawn of the new era. During the 80s everything was slowly becoming electronic and digital. This includes the drums. It was at this period where the electric drums became very popular. Super popular in fact that its popularity threatened to phase out the traditional drums. However, that never fully happened.

Traditional drums have a timbre that’s difficult to replace. However, the variety of sounds that electronic introduce are difficult to ignore. Many drummers use drum triggers to augment the sounds of their drums, along with other hybrid setups.

Drumming can be a great workout

Drumming can burn a lot of calories and keep you in shape. Particularly, if you’re a hard hitting drummer then you may be surprised at how much of a workout you’re getting when drumming. A study by Chichester University measured the heart rates for a sample of drummers and found that a big drumming session could bring them to near-max recommended heart levels, a similar rate that would be experienced with high intensity exercises.

In fact, there’s even a movement of exercises classes known as Cardio Drumming that takes advantage of this!

Did you know that humans are not the only living creatures know for drumming? Macaque monkeys were actually discovered to drum objects in a certain rhythm to portray social dominance and it has also been a part of social communication. Other primates also create drumming sounds but by beating their chest or clapping. And surprisingly, rodents like kangaroo rats also make drumming sounds by using their paws to create beats on the ground.

You can learn to drum with basic materials

If this article made you interested to actually learn how to play the drums, and are still apprehensive because of the initial cost of getting your first drum kit. Do not fret, you need not buy an actual drum set yet before learning the basics of drumming. Simply start with a pair of drum sticks and learn how to create those beats. You may start by finding any location where you can sit and hit on whatever kind of surface that can make sound. It may be a bed, a table, inverted bucket, etc. Alternatively, if you want to play on a full acoustic drum set then check out our article on the best drum sets for beginners.

Be creative and use objects that you have at home. The most essential skill to acquire in learning to play these instruments is by knowing how to create those funky and spunky drum beats. See this video to learn the 5 most basic drumming skills.